From a bicycle, neighborhood boundaries dissolve almost completely in favor of broader geography and an impressionistic experience of the city.

For me, the best rides include a mix of green spaces, tranquil detours and architectural intrigue. One favorite 13-mile route heads northward, from my home near California and Armitage in Logan Square, toward the North Shore Channel Trail and the city limit, before looping back via side streets.

There are sights you might miss in the blink of an eye but the MiCA Apartments at—you guessed it—Milwaukee and CAlifornia is not one of them. Designed by Wheeler Kearns Architects and completed in 2016, these twin glass-and-concrete buildings rise in undeniably sharp contrast with the low-rise context. MiCA’s high rents fueled fears of accelerated gentrification but, whatever your take, this is the most significant transit-oriented development (TOD) in the city in years.

Continuing north on California to Logan Boulevard, I check in on old greystones and subdivided mansions that harken back to the golden age of Chicago’s “emerald necklace” boulevard system. (I would argue we’re in a renaissance of that era now.) Boulevards were the next best thing to country retreats for newly affluent Chicagoans at the start of the 20th century. A true standout is the Prairie Style John Rath House (2703 West Logan Boulevard). Designed by influential architect George Maher, it features a broad hipped roof, art glass windows and gigantic covered porch.

Following the boulevard east past Western Avenue, the way bends north and the greenery disappears. (Tip: Walk your bike if you find the traffic unnerving.) Where Logan ends at Diversey Parkway, I cross the river and pause at the historic Julia C. Lathrop Homes. This 34-acre public housing complex took inspiration from the English Garden City movement, with low-rise brick apartment blocks carefully sited in a Jens Jensen−designed landscape to allow ribbons of green to permeate the plan. Lathrop is undergoing a transformation to a mixed-income community, with building restorations and open spaces its main components. It’s worth dismounting for a stroll across the Great Lawn and down to the reconfigured riverbank.

From there I exit Lathrop to the north on Leavitt Street, turn left on Clybourn Avenue, left again on Belmont Avenue, and pedal back to the river. Here, a recreation trail cuts north via an unmarked ramp. Clark Park I would categorize as “hidden in plain sight,” tucked behind the adjacent campuses of DeVry University and Lane Tech College Prep. Studio Gang’s award-winning WMS Boathouse at Clark Park appears like a village of Shingle Style houses imported from Cape Cod, compressed into larger structures generating jigsaw rooflines. 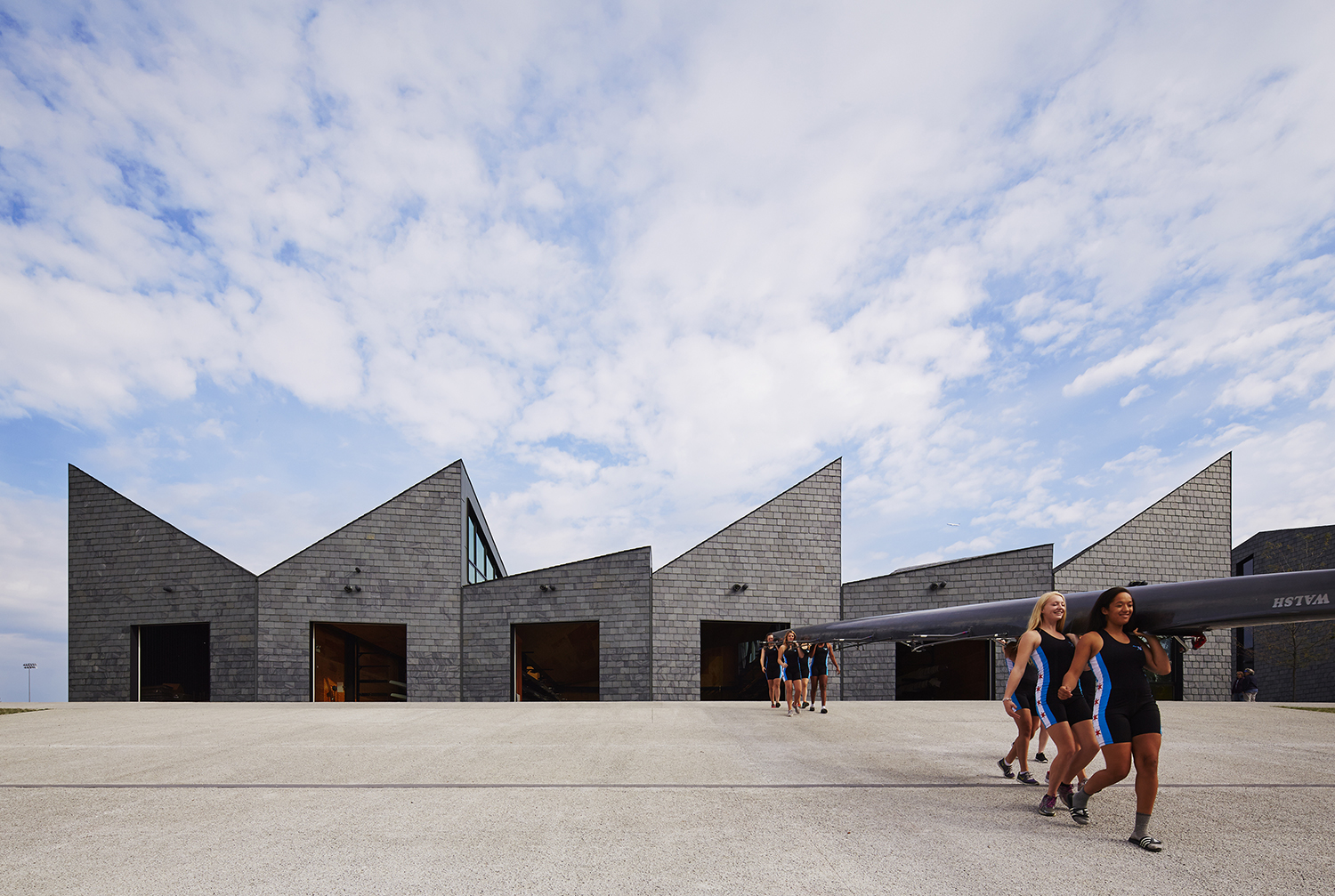 North of Addison Street, the trail gets another dose of drama: A new connector dubbed 312 RiverRun, by Epstein’s Chicago office (and a terrific supporting cast, including teams at Hoerr Schaudt and UrbanLab), carries walkers and bikers across the river on a winding course. What could have been a simple, utilitarian crossing became awe-inspiring; we deserve more generosity of this kind in the public realm.

312 RiverRun brings you back to the river’s west side. Cross Irving Park Road to meander through Horner Park. Whenever I pass, it seems someone is flying a kite and the artificial sledding hill makes a fantastic picnic spot. (There’s great Cuban, Mexican and Serbian takeout available just to the west on Irving Park Road.)

Exiting at Montrose Avenue, it’s back to side streets through charming Ravenswood Manor. At Lawrence Avenue, I cross the river again to find the south end of the North Shore Channel Trail. This trail could be its own journey, running unbroken for several miles to the heart of Evanston, but there’s an argument for turning west off the trail at Peterson Avenue. This major thoroughfare offers several commercial buildings worthy of a second look. As highlighted by a 2018 article for Chicago magazine, celebrated photographer Lee Bey singled out whimsical examples of So-Cal inspired Modernism along Peterson between Western and Central Park.

I go off-road again at Peterson Park. Following the park’s circuitous path, I exit south to an unmarked road and turn right to enter the 46-acre North Park Village Nature Preserve—perhaps the best simulation of prairie woodlands Chicago has to offer.

Just south of the preserve, I take a spin through Bohemian National Cemetery, dedicated in 1877 with such notable interments as assassinated mayor Anton Cermak and the victims of the Eastland disaster. Its crenelated limestone gatehouse is a stunner, evoking a Czech castle; as others have recently rediscovered, some of Chicago’s largest, prettiest green spaces are its historic cemeteries. 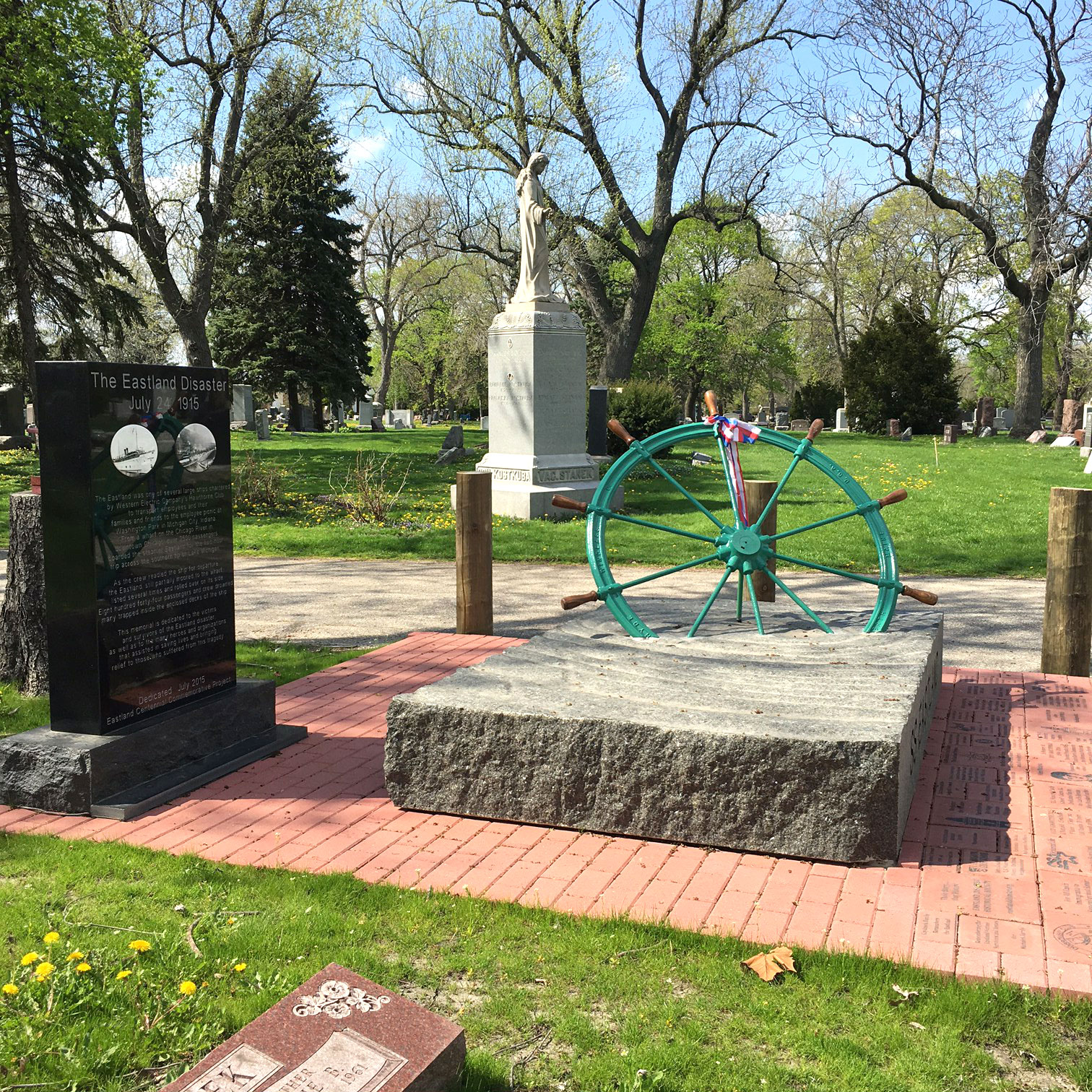 From the cemetery’s west edge along Pulaski Road, I head east on Foster Avenue, then south on Avers Avenue for a slow roll through the leafy blocks of Albany Park. Independence Park invites a water break for one reason in particular: its monumental fieldhouse by underappreciated architect Clarence Hatzfeld. This was the first of many fieldhouses Hatzfeld would design for Chicago’s parks in the early 1900s, in a characteristically eclectic blend of classical and vernacular styles. If so inclined, detour through the Villa District to see Hatzfeld’s best residential work: 20 or so homes riffing on Prairie and Craftsman themes. 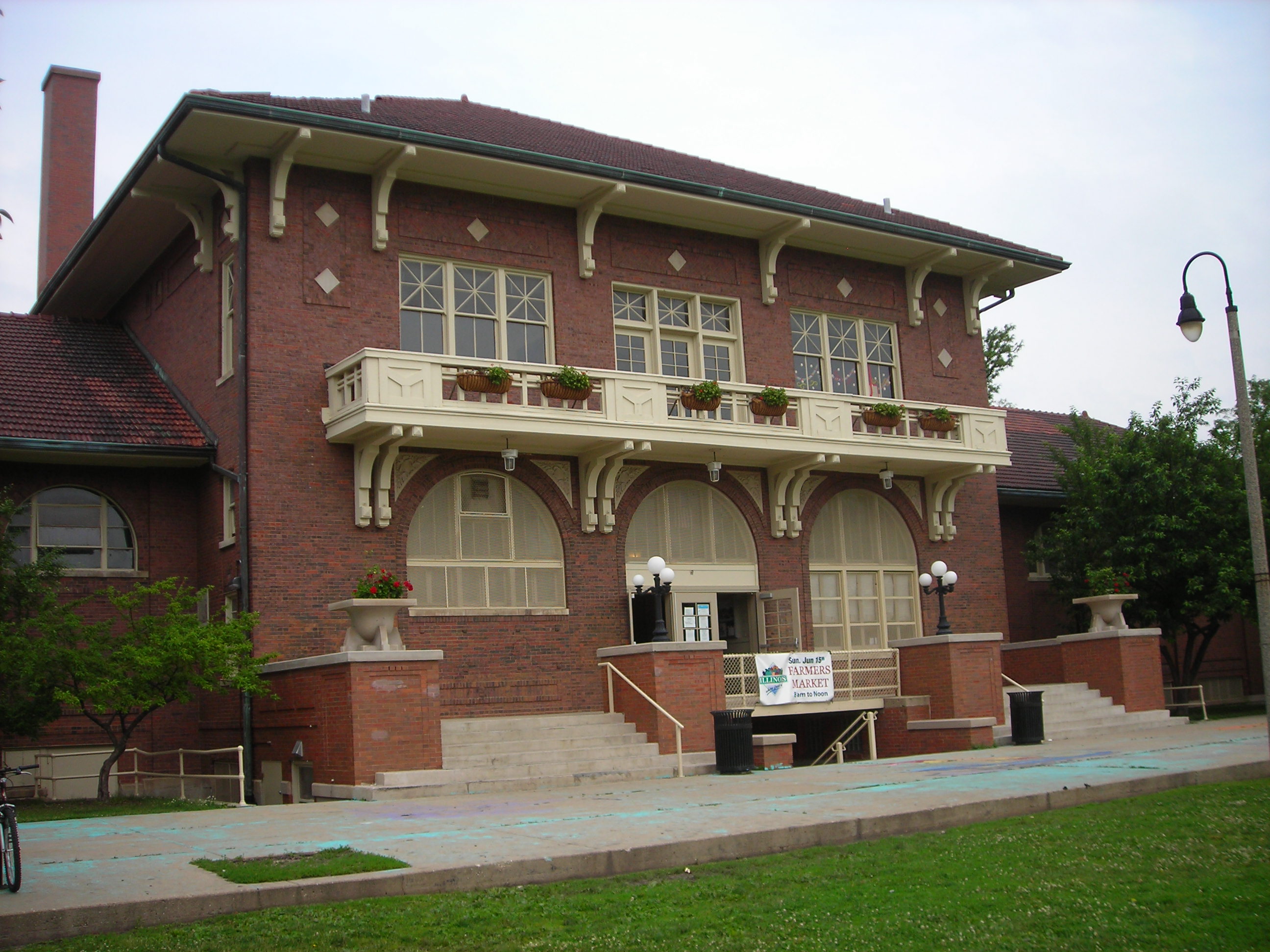 To cap the ride, I weave southeast on side streets to find Kimball or Kedzie Avenue, taking either south to rejoin Milwaukee Avenue. Logan Square proper always feels like a symbolic end to this journey—and a great place to rest in the shadow of the Illinois Centennial Monument, designed by Henry Bacon, architect of the Lincoln Memorial. 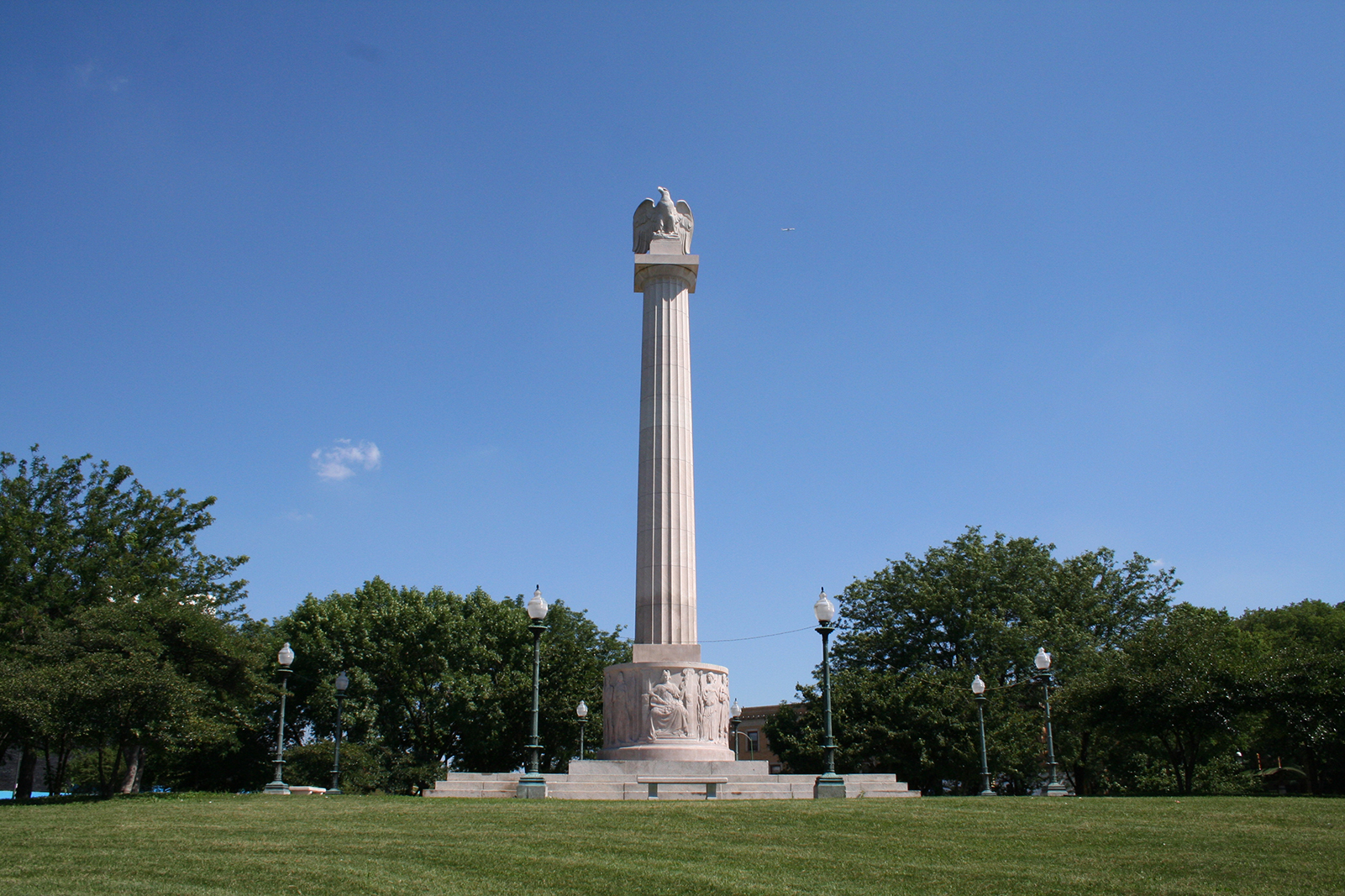 Potential variations to this bike ride are nearly infinite; we hope you’ll share your favorite stops and detours with us @chiarchitecture on social media. Be sure to bring a mask, and happy pedaling!