Weiss and Manfredi’s ability to transform underutilized, abandoned or neglected sites into places that draw in large numbers of people and drive economic growth can be seen in Seattle’s Olympic Sculpture Park and the new Hunter's Point South Waterfront Park in Queens, New York, among other projects. The two will discuss their work and consider sites in Chicago that could possibly benefit from similar treatment during this lecture and moderated conversation at CAF. Noted architectural commentator Reed Kroloff will serve at the night’s host and interviewer. 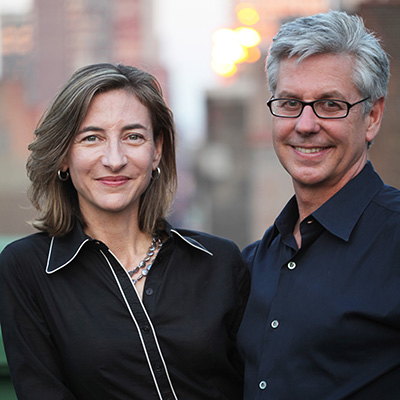 Marion Weiss and Michael Manfredi are co-founders of WEISS/MANFREDI, a multidisciplinary design practice based in New York City known for its dynamic integration of architecture, art, infrastructure and landscape. The firm's notable projects include Olympic Sculpture Park in Seattle, Brooklyn Botanic Garden's visitor center and the Singh Center for Nanotechnology at the University of Pennsylvania in Philadelphia. Marion received her Master of Architecture at Yale University and Michael received his Master of Architecture at Cornell University. Both Marion and Michael have lectured at top universities and been honored with numerous awards, including the Academy Award for Architecture from the American Academy of Arts and Letters and the New York AIA Gold Medal.

Learn about the history and planned restoration of the House of Tomorrow, a futuristic model home designed…

Join us for an evening of bikes and brews at Revolution Brewing. Local experts will give rapid-fire presentations…

Join us for a special walking tour of the Art Institute of Chicago’s South Garden. CAF has arranged…