We’re excited to see how the lifestyles of this great generation will impact the way cities are designed. How might we see Chicago’s built environment evolve to adapt to the many Baby Boomers getting ready to retire?

1. Baby Boomers make up a big part of the population…and they’re getting ready to retire.

Political issues surrounding topics like Medicaid and social security are bringing a lot of attention to the Baby Boomers. Between 1946 and 1964, the US saw a major population increase in this generation, hovering around 76 million babies born.

Now that this population is approaching retirement, researchers and senior citizen advocates such as the American Association for Retired Persons (AARP) are launching initiatives to understand how the individuals who make up this important generation are preparing for the next stage of their lives.

2. The livability index is making it easier to understand how to improve the quality of lives for Boomers.

What constitutes a livable environment? According to the AARP, “As the U.S. population ages, we face a serious challenge: our communities are not prepared for an aging society. In an effort to address this urgent problem, AARP sought to help consumers and policymakers decide whether their communities are places where residents can easily live as they get older. Taking a multifaceted approach to assessing livability at the neighborhood level, AARP developed this ground-breaking tool to jump-start community conversations about livability and encourage action by consumers and policymakers alike.”

Enter The Livability Index, a survey given to 4,500 individuals, ages 50 and above, to get a sense of general preferences for livability. The survey examined major elements of day-to-day living, including housing, health and transportation. The overarching trends indicate that seniors: 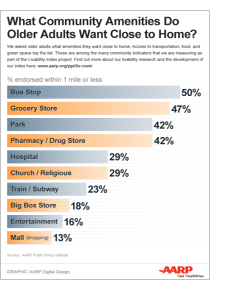 3. Baby Boomers are different from other retired generations before them.

Surveys have found that the Baby Boomer generation is preparing for the next stage of life in very different ways than generations prior. It was common for generations before the Baby Boomers to stay with a company for three or even four decades before retiring. Today though, many Boomers continue sharpening their professional skills, in large part because 65% of this generation foresees working past retirement age, or not looking towards retirement at all. Only 32% are counting on social security as their primary income source. Obviously, attitudes toward aging are changing. 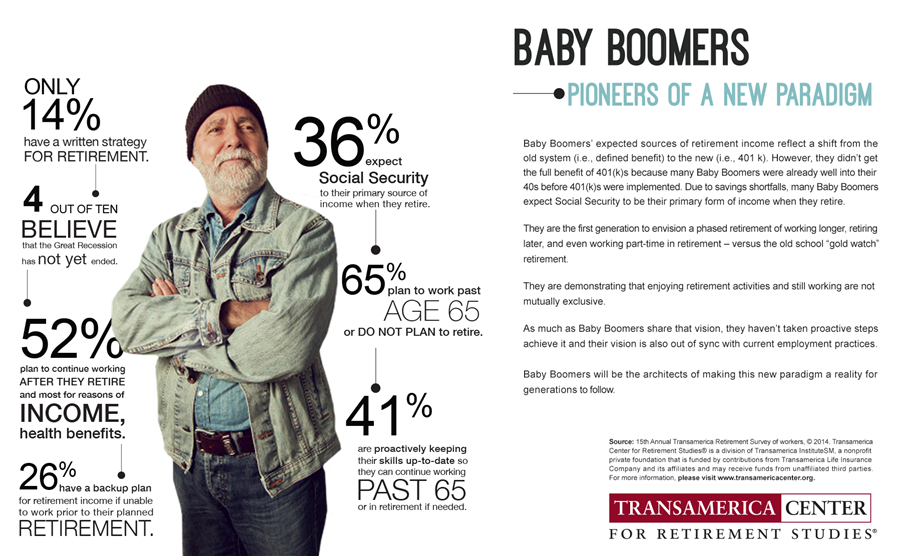 It has been suggested that Baby Boomers are also looking to maintain active lifestyles. Support by recent survey data suggests that seniors are less interested in moving to retirement communities and more enticed by urban areas, whether staying in the city they live in, or moving to places where transit and amenities are more readily available.

The main goal of designing a livable area is improving health. The physical health of the city’s residents, creating positive and equitable community relations and ensuring that sustainability are all a priority. Housing and transportation remain key to creating and maintaining that environment.

Transit Oriented Development (TOD) refers to zoning laws that connect high-density housing and transportation. The Livability Index reveals that seniors desire access to affordable, sustainable public transit and also, a variety of housing options with access to said transit. Seniors, whether single or families, want to live in a diverse environment. Along with diversity in housing comes opportunities for greater numbers of affordable housing. In Chicago, laws mandate a specific percentage of units in a building to be designated as affordable, and greater numbers of rezoned TODs can potentially bring about more affordable housing for seniors and families.

5. Millennials will soon become close friends with seniors and together, will become advocates for change.

According to Peter Ellis, Principal at CannonDesign (designing future infrastructure for Boomers), we’re looking at a future in which Millennials and seniors will make up roughly half of the population of the average American city.

What is most striking about the findings of the Livability Index is how universal they are. Community amenities such as quality parks and maintained pedestrian areas, mixed-use living and access to sustainable transit, have typically been associated with younger generations who opt for bikes and public transportation over cars, and prefer local grocery stores and farmers markets to supermarket chains.

In actuality, the desires of Millennials and seniors seem to match. As more young people move into cities, demanding efficient and affordable living spaces, they may find that their closest allies for vibrant, sustainable communities are the Baby Boomers living next door.