The Present, 2017
Jesse, David and Cristina realize classroom exercises about zoning, fair housing, gentrification and displacement are real, urgent issues when they discover their friend Natalie is being evicted. Their backgrounds give each of them a unique point of view about neighborhood change. As they work to support Natalie they become involved with Chicago’s history of development, organizing and resistance, and they begin to understand that making change takes community involvement. 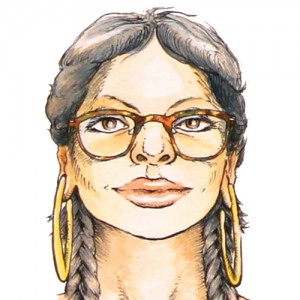 Cristina is the daughter of a large, extended Mexican-American family rooted deeply in the Pilsen neighborhood (within the Lower West Side community area). Her family originally hails from Durango, Mexico, and her relatives still live there. Cristina carries the legacy of her family’s community activism, and is familiar with her neighbors and other members of the community. When she was a baby, Cristina’s parents were active in the neighborhood’s fight to close a nearby coal-fired electric power plant and they often took her to rallies as a child. She attends a public arts magnet high school in Logan Square along with David, Jesse, and Natalie. She also has a strong interest in mural painting and performance art. 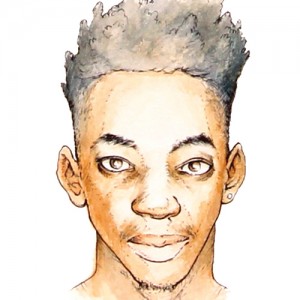 David is being raised by his construction-worker father in the Englewood neighborhood. Their home—an 1890s Greystone three-flat apartment building commonly found in the area—has been in his family for several generations. David loves listening to and producing music and he can usually be found with headphones hanging around his shoulders. He also plays sports and has a strong love for video games. Having lived in Englewood his entire life, David understands his neighborhood well and actively observes it. As he walks the sidewalks around his home, he can frequently be seen calling out to neighbors and friends. He tries to make a difference in the lives of his neighbors by volunteering his free time at a community center. To get to school, David commutes about one hour each way by public transportation (bus/train). He attends the same public arts magnet high school in Logan Square, where he is friends with Jesse. 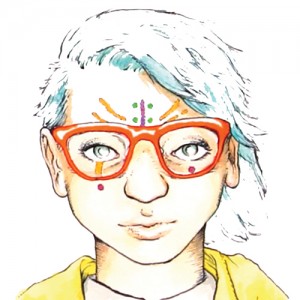 Jesse is the son of a two-parent middle-class family in the Logan Square neighborhood. He lives in an 1890s two-flat apartment that has recently been converted to a single-family home. Unlike Natalie who has lived in Logan Square her whole life, Jesse’s family just moved to the neighborhood at the start of the school year. Though curious and enthusiastic, unlike David and Cristina, he is unfamiliar with his neighborhood’s history, people, and culture. Jesse is a tech-savvy lover of the internet, meme culture, and the musical genre known as Vaporwave. He also loves photography and carries his camera everywhere to capture people in candid moments. Jesse met David, Cristina, and Natalie at the arts magnet high school at the beginning of this school year. 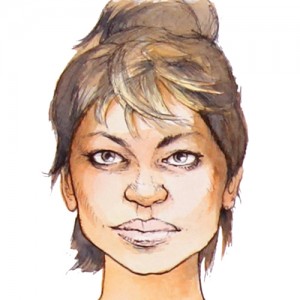 Natalie has been raised in the same Logan Square apartment where her mother grew up. She has extended family in the neighborhood and deep roots in the community, where she attends the arts magnet high school. Until now, she’s been generally apolitical and unaware of the fast-rising rents and property taxes in Logan Square and Humboldt Park. Her own family is being evicted because their large apartment building has been sold for redevelopment. Natalie’s home is located near The 606—a 3-mile linear city path/park adapted from abandoned train lines. This popular new public amenity is driving up the cost of surrounding housing. While hesitant to say what’s wrong, she eventually shares news of the eviction with her friends, including Jesse who recently moved into the neighborhood. Through her friends’ support and encouragement, Natalie starts to connect her personal experience with the experiences of other communities as well as her very own neighbors.

Logan Square, 2017
The community area of Logan Square has seen constant change since it officially became part of the city of Chicago in 1863. Located approximately 3 miles from downtown, the area is bordered by the Metra rail tracks (west), the North Branch of the Chicago River (east), Diversey Parkway (north), and Bloomingdale Avenue (south).

Open prairies became farmland in the 1850s and 1860s. The population quickly grew after the Great Chicago Fire of 1871 as developers divided up large tracts of land for housing along the newly established Chicago and Northwestern Railway and the elevated ‘L’ train line. Local manufacturing industries provided job opportunities. Since the area was beyond Chicago’s fire limits, which mandated fire-proof construction, new housing in Logan Square could be built quickly and cheaply from wood. Eventually by the 1880s, many grand two- and three-story Greystone apartments were constructed along the three boulevards and open squares for upper middle-class German and Scandinavian immigrants.

The area boomed after World War I and those original, upwardly mobile immigrants moved to less dense north and west neighborhoods along Milwaukee Avenue. With an influx of Polish, Russian, and Jewish immigrants, new brick two- and three-flats—along with churches, shopping districts, schools—were constructed on the neighborhood’s remaining empty parcels.

From the 1930s to the 1960s, the community area suffered a decline in population in part because the new 10-lane, elevated I-94 Kennedy Expressway ripped the neighborhood in two. Construction for the freeway demolished housing and eliminated easy access to industries along the Chicago River. Into the late 1960s and 1970s, the neighborhood saw a new influx of Puerto Rican, Cuban, Mexican, and South and Central American immigrants. Residents established the Logan Square Neighborhood Association, which remains an active voice in the community today.

Beginning in the 1990s, and now into the 21st century, Logan Square has become home to young urban professionals, often drawn by the neighborhood’s stock of historic housing. The 606—a new 3-mile linear city path/park adapted from abandoned train lines—has become a popular new public amenity which is driving up the cost of surrounding housing. The neighborhood is culturally, racially, and economically diverse and yet also one of the city’s fastest gentrifying areas. Hispanics and Latinos make up approximately 50% of the area’s population today, but the neighborhood has seen an overall 11% decline in population in the past 10 years.

Lower West Side, 2017
The Lower West Side community area includes the more locally-known neighborhoods of Pilsen, Heart of Chicago, and Little Italy. Since its beginning, the area has been a port of entry for working-class immigrants and migrants seeking jobs and homes. The area is bounded by the South Branch of the Chicago River (south and east) and the Burlington Northern railroad (north and west) and located approximately 3 miles from the city center. For more than a century, the river and surrounding infrastructure have proven hard boundaries, limiting development. Yet as The Encyclopedia of Chicago explains, “Though the area remained somewhat isolated for much of its history, its neighborhoods—especially Pilsen and Heart of Chicago—have been vibrant and dynamic enclaves for generations of Bohemians, Germans, Poles, and Mexicans.”

Displaced after the Great Chicago Fire on 1871, many Bohemian and Czech immigrants settled along 18th street. They joined German, Irish, Polish, Slovak, Slovene, and Italians in heavy industrial work at the nearby lumber yards, breweries, Union Stockyards, and McCormick Reaper Works plant. At one time, the Lower West Side had one of the densest populations in Chicago. These ethnic groups lived in two- and three-flat brick apartments, boarding houses, and one-and-a-half story worker’s cottages. Their hard-earned savings built massive ornate churches, schools, and social halls. Many social services agencies were developed to serve the poor.

As with many neighborhoods in Chicago, the years surrounding the Great Depression and post-World War II saw massive change. The I-55 Stevenson Expressway was constructed through the neighborhood and as factories and the Union Stockyards closed in the 1950s and 1960s, many Mexican-Americans and some African-Americans who had worked in those industries moved north into the Lower West Side. They were joined in the 1970s by new immigrants arriving from Southwest states and from Mexico, Puerto Rico, El Salvador, and Guatemala. While the architectural character stayed very similar to what had been built in the late 19th century, citizens also created cultural centers, social services, and legal aid societies to accommodate new residents. The Lower West Side has had a long history of vibrant culture, activism, and organizing, but the neighborhood is losing people. Between 2000 and 2018, the population decreased by 18%. Today, the Lower West Side is home to nearly 30,000 first, second, and third generation Hispanics and Latinos.

Englewood, 2017
The story of Englewood has been one of massive change and also great human resiliency. As The Encyclopedia of Chicago notes, “…few communities in Chicago have lost as much population or housing stock in the 20th century.” Englewood—located on the South Side of the city and approximately 10 miles south of downtown—is bordered by Garfield Boulevard (north), 75th Street (south), State Street (east), and Western Avenue (west).

In the 1850s, the area was the site of several freight and passenger rail lines that crossed in the town of Junction Grove, which would eventually become Englewood. The population grew in the mid-19th century around those intersections as Irish, Scottish, and German immigrants were drawn to work on the railroad and in the Union Stock Yards. By the late 19th century, those original immigrant groups were joined by newcomers from Poland and Bohemia. The neighborhood became well connected to downtown through horsecar and trolley transit lines and the railroad. Two-story wooden and Greystone homes from the 1880s to the 1900s were tucked in between rapidly-built brick two-flats and four-story apartment buildings in the 1910s and 1920s. The population by 1940 was 92,000.

Into the 20th century, several factors led to a dramatic racial and economic shift in the neighborhood. As the income levels of the original white immigrants rose, they sought out new, less-crowded communities. At the same time, Bronzeville—the neighborhood to the north—reached a tipping point. African American residents living in overcrowded housing bound by redlined districts and covenants that restricted where they could buy property, began to challenge those imposed constraints, seeking more space and better living conditions. As white residents moved out to the first ring of suburbs, black residents moved in to Englewood. According to The Encyclopedia of Chicago, “In 1940 blacks constituted just 2 percent of the population, but this increased to 11 percent in 1950, 69 percent in 1960, and 96 percent by 1970. In 1960 the population peaked at over 97,000 people, despite the exodus of 50,000 whites.” Today, African Americans make up more than 97% of Englewood’s population.

Decades of economic disinvestment and a lack of job opportunities have led to a high crime rate and high unemployment. Today Englewood has a 28% home ownership rate. There are approximately 10,000 housing units but more than 40% stand vacant. At the same time, several strong new K–12 schools and after school programs have been established in the neighborhood, bringing new opportunities for young people. The local community college refocused its educational programs on the culinary arts and hospitality. Churches and social agencies continue to provide much-needed services and job training. In 2016, a new retail hub and a large new grocery store were constructed, bringing job opportunities and helping in some ways to relieve the ‘food desert’ in which many residents lack access to fresh food and/or food staples.