1. It’s built on top of a parking garage

The three-level East Monroe Street Parking Garage was built in 1974 on what had been rail yards for most of Chicago’s history. In 1976, a formal park, Daley Bicentennial Plaza, was constructed atop the garage.

2. It owes its life to water leaks

It wasn’t a total loss. Some of the trees were recycled in the new park as log benches. Others were replanted upside down as part of an “Enchanted Forest” in the play area of Maggie Daley Park.

The new waterproofing is a hot-applied monolithic membrane system with minimal seams. That may sound newfangled, and it is. Everyone’s hoping the waterproofing technology will better protect the cars in the garage and give the new park a longer life than the old one.

3. It was the site of a major battle over the future of Grant Park

In 2007, then-Mayor Richard M. Daley announced that the Daley Bicentennial Plaza would be the site for a new building for the Chicago Children’s Museum. The news touched off a massive protest from advocates of keeping the lakefront “open, clear and free of any buildings,” as stated in the 1836 mandate that created Grant Park. The protests, coupled with the 2008 economic crash, crippled the museum’s fundraising efforts, and in 2012, Chicago Children's Museum signed a long-term lease to stay at its current Navy Pier location.

4. It was designed by Michael Van Valkenburgh

To design the new park, the Chicago Park District brought in award-winning landscape architects Michael Van Valkenburgh Associates, known for such work as the new Brooklyn Bridge Park in New York. Van Valkenburgh’s design for Maggie Daley Park mediates between the hyperactivity of Millennium Park and the more traditional formal design of Daley Bicentennial Plaza, which some found static and boring.

Van Valkenburgh’s design splits the park into an “active axis” with new interactive features and a “passive axis,” which harkens back to the idea of a park as a place of quiet refuge. It includes a series of low hills that gives visitors a sweeping view of the park, the spectacular architectural backdrop of skyscrapers to the north and west and the pulsing traffic of Lake Shore Drive and Lake Michigan to the east. The hills were created with Foam-Control EPS Geofoam, 100 times lighter than soil, cut into large blocks like so many oversized white dominoes. 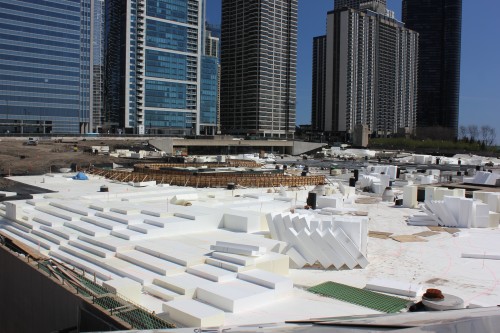 5. It has a skating ribbon and a fort

The “active axis” was the one on display first at the “soft” opening in December 2014. First-day visitors flocked to the continuous, quarter-mile long “skating ribbon” that wraps around two 40-foot-high climbing walls, still under construction at the time. At the opposite end of the park, kids and parents delighted in the attractions of the nautical-themed play area, which includes a ship for climbing, a lighthouse with a tall slide and a whimsical fort with a suspension bridge linking its two towers.

6. The Full Glory of Maggie Daley Park Will be many years in the making

As the park opened officially in June 2015, it had already begun to grow green, with broad lawns flowing through its center like a pastoral river between the skating ribbon and the play area. New trees for the park were chosen from a wide variety of species. They’ll make the landscape more visually diverse and reduce the risk of the park being devastated by an insect infestation of a single type of tree.

It will take at least a decade for the new trees to begin to mature. Until then, the most visually dominant aspect of Maggie Daley Park will be its sequence of thirteen 50-foot-high lighting tripods. As a soaring counterpoint to the horizontal trellis of the Pritzker Pavilion across the Gehry Bridge, the tripods seem to march through the park like giant spindly insects, fixing their hungry light-bulb eyes on the surrounding skyline.

Maggie Daley Park by the numbers

Lynn Becker's writings on architecture have appeared in the Chicago Reader, Metropolis Magazine, the Harvard Design Magazine and on his blog Chicago Architecture Plus.