Have you heard the buzz about The 606? Did you know that the park is more than just the elevated path called the Bloomingdale Trail?

The 606 is a larger project that includes the Bloomingdale Trail and six adjacent street-level parks. Four of the parks already exist—Walsh, Churchill, Park 567 and Julia de Burgos—and two are yet to be completed. Landscape architecture firm Michael Van Valkenburgh Associates Inc. worked together with the Trust for Public Land to design the project. 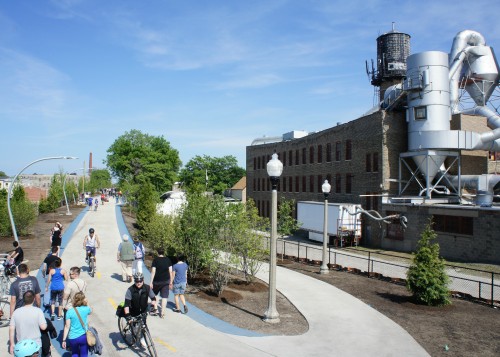 The History of the Bloomingdale Trail

The elevated railroad viaduct that many consider the heart of The 606 was once a busy freight line serving Chicago’s early industries. Though it was critically important to the city’s economy, the structure itself divided neighborhoods. The massive concrete wall physically separated Logan Square and Bucktown from Humboldt Park and Wicker Park.

When rail service on the line gradually faded and finally died around 1990, the line was abandoned. The Canadian Pacific Railroad, owners of the structure, couldn’t give it away. Some community members, recognizing their neighborhood sorely lacked green space, began to use the viaduct as a walking and biking path.

Eventually, a nonprofit group materialized, calling itself the Friends of the Bloomingdale Trail. They called for the trail to be converted to green space in the form of the “Bloomingdale Linear Park.” The Logan Square Neighborhood association also included the proposed park in their Open Space Plan in 2004. As momentum grew, the City of Chicago recognized the viaduct’s potential. In 2011, Mayor Rahm Emanuel’s administration aggressively began to pursue a new design for the old viaduct. 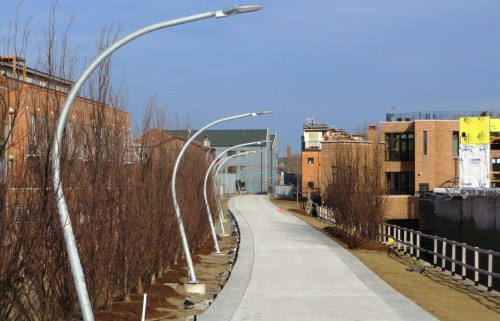 From One Type of Transportation to Another

Soon, plans materialized to convert the trail into landscaped parkland for walking and bicycling. The bicycle infrastructure was critical to the project’s funding. Because it qualifies as an alternative transportation corridor, The 606 nabbed $50 million in U.S. Department of Transportation funds. That proved to be a large chunk of the project's total $95 million budget. Much of the park is being financed by private donations, but it is among the Chicago Park District’s most expensive capital projects in years.

The story of The 606 is one of urban design and redesign. It’s difficult to overstate its value. The rail line fit the needs of the community more than 100 years ago, and the park fits the needs of the community today. It’s been beautifully repurposed to support neighborhood cohesion, educational opportunities and promotion of the arts. The trail now knits communities together where it once divided them.