CAC’s Jen Masengarb partnered with WBEZ’s Curious City to research a story about the history that lies within Chicago’s apartments. Listen to the broadcast.

If you’ve lived in or visited an older home or apartment building in Chicago, chances are it has an odd door or some other quirky feature that seems out of place. For Biz Knapp, it was a mystery closet in her East Rogers Park apartment. It’s just across from her living room couch, about a foot deep, and can’t even fit a bulky winter coat, she says. The closet got her thinking about what similar types of features might be found in other buildings. So she came to Curious City with this question: How have older Chicago apartment layouts changed over time?

Biz’s question gets at more than just changes in style or material used — features like her mystery closet are architectural clues about the way people once lived. They reflect changes not just in economics and technology, but even more intimate parts of life, like gender roles and expectations about privacy.

As it turns out, Biz’s closet was once a murphy bed (the kind that folds up into a cabinet in the wall), and her apartment building was actually a residential hotel — the Hotel Sherwin. This was a new kind of housing developed in the 1920s, with compact units meant to accommodate young single people or couples coming to Chicago to look for jobs.

Biz’s living room closet is one of many architectural clues harkening back to a different time in Chicago. Below, we list other architectural features — Biz’s murphy bed and beyond — that reveal moments in our shared history. 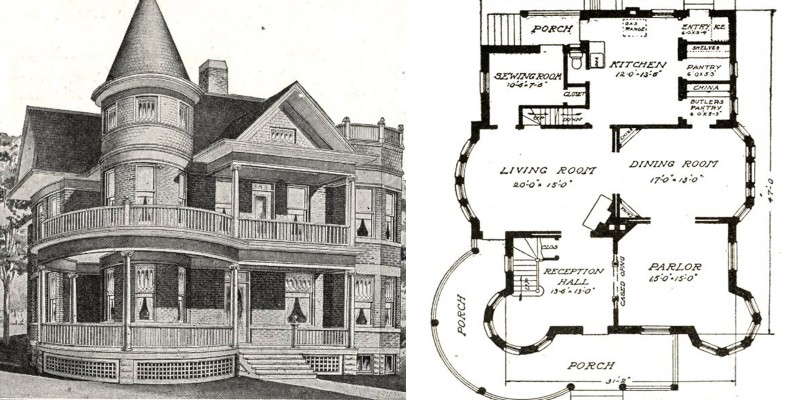 The interiors of Chicago’s late-19th-century homes reflected Victorian ideas about family, privacy and propriety. Pocket doors, or sliding doors that could tuck away into the adjacent wall, provided an elegant method of closing off rooms while also saving space. Today, it’s perfectly normal to eat dinner with friends on the living room couch. But in the late 19th century, rooms had unspoken rules.

The spaces and rooms that wealthy families occupied were separated into distinct spheres — women/men; parents/children; servants/served; guests/families — and the floor plans in these homes reflected these distinct domains. You formally welcomed guests into the hall and parlor. Guests would not have been permitted to see how or where food was prepared — it just arrived, as if by magic, in the dining room. Families gathered and relaxed in private spaces out of sight from visitors. 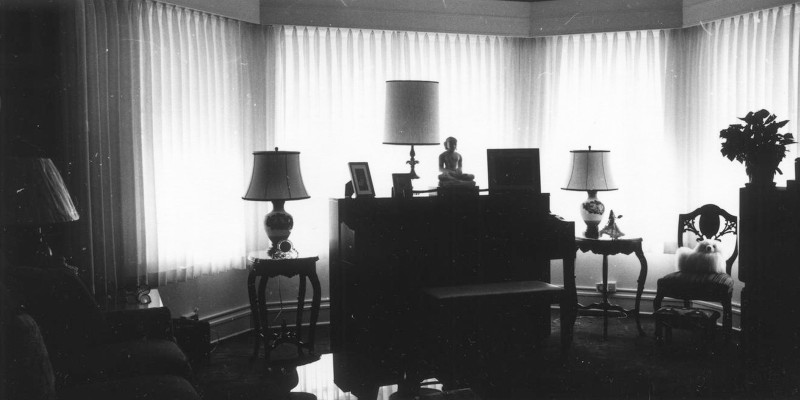 As a new middle class began to emerge in Chicago in the early 20th century, families wanted practical features that also expanded their living spaces. Three-sided bay windows were the perfect addition to the rows of greystones, two-flats and bungalows springing up in new neighborhoods throughout the city.

Before bay windows were added as an architectural feature, most cramped tenements or rooming houses had just a single window that faced the street. Bay windows were larger and angled outward, so they made the living space seem bigger. And, in an era before electricity or air conditioning, bay windows were also vital to human comfort. They provided views both up and down the street, increased ventilation and brought in more natural light. 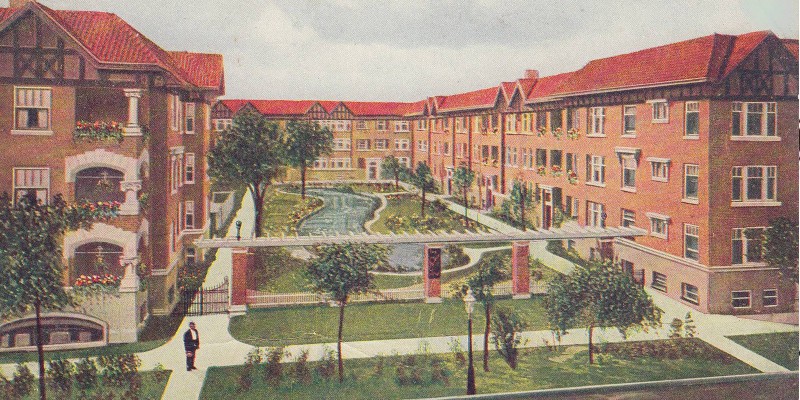 As Chicago became increasingly crowded in the late 19th and early 20th centuries, residents and architects looked for ways to bring nature closer to living spaces, increase privacy and decrease the feeling of density. A new type of housing complex — the courtyard building — offered all three. The majority of courtyard buildings were built between the 1890s and the Great Depression, and they were typically a three- to four-story brick construction. The buildings were organized around a central, semi-public garden space that brought nature deep into the lot. Separate entrances provided additional privacy and meant sharing access with only a handful of neighbors. And in an increasingly dense city, the courtyard buildings provided apartments with ample light, air and views — all centered around the natural world more commonly associated with suburbia. 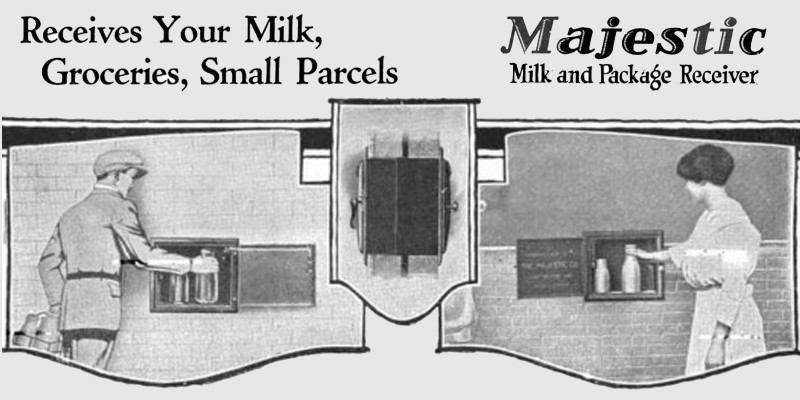 As incomes increased, people could afford electrical appliances and small luxury items that made domestic work easier. The Majestic Co. milk and package receiver door was marketed as a “silent servant” in the delivery of certain goods, and it was fairly common in Chicago apartment buildings throughout the 1920s. The cast iron unit, built into the wall, had hinged doors on both sides and a unique lock mechanism. You could retrieve your milk or package, whenever it was convenient. Majestic also sold kitchen ice boxes, coal chutes and garbage receivers. Today, with the popularity of online shopping, perhaps the receiver door is ready to make a comeback?

In the early 1900s, it was considered quite scandalous to let someone — especially of the opposite sex — see where you slept. Murphy In-A-Dor beds, as they were officially called, first began appearing in Chicago homes in the early 1900s. The company touted their use in every building type, “from love nest bungalows to towering hotels.” Designed to flip up into the wall to save space, the Murphy In-A-Dor beds also allowed for greater privacy. Today, Murphy beds are making a comeback as urban dwellers move into micro-units and need more space as they work from home. 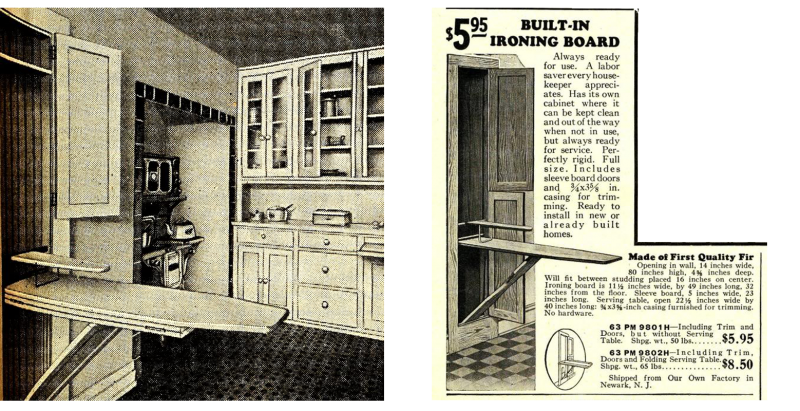 In the 1920s, small built-in features eased the burden of household chores for women. Behold the humble Chicago bungalow laundry chute and closet ironing board! These simple fixtures reflected major shifts in the roles of women in the 1920s. Electricity and new labor-saving appliances, like washing machines, radically changed the domestic workload. Laundry — which had been an all-day, dangerous and dirty job done in the kitchen or the backyard — was moved to the basement. Many new Chicago bungalows included laundry chutes in the bathroom or bedroom hallway so the family could drop their dirty clothes straight downstairs. New, cleverly hidden, space-saving features, such as foldaway ironing boards, were designed with efficiency in mind.

In the late 20th century, servants began to disappear from most homes, and conventions around meal preparation also changed. These shifts were reflected in the layout and designs of kitchens. Meal preparation used to be incredibly labor intensive and dirty, and homes were designed to hide cooking spaces in the back of the home behind closed doors.

Today, open floor plans bring together family functions of cooking, eating and relaxing into one large space. Nothing provides a better illustration of these cultural changes than the kitchen island. One hundred years ago, it would have been unimaginable to have guests over while you stood together in the kitchen, chatted with them over a glass of wine and stirred dinner on the stove. 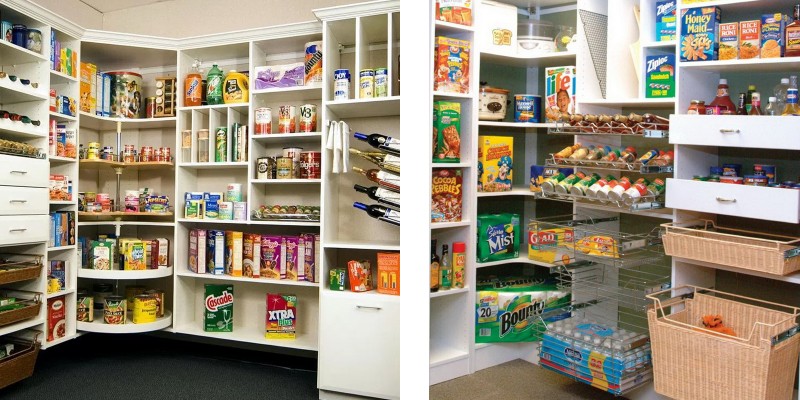 The growing popularity of large closet spaces today reflects changing consumer culture, the rise of big-box retailers and increasing disposable income. “The Costco closet” — as it’s known in the real estate business — provides a space for storing those unbeatable deals of 30 rolls of toilet paper. In 100 years, when future homeowners are looking to remodel, what will they imagine these closets held?

More about our questioner

Biz Knapp is a Chicago artist. She and her boyfriend Tyler Nickell met in art school and moved to East Rogers Park from Michigan three years ago. They use the mystery closet they asked Curious City about for their TV. They say they like the fact that they can hide it when guests come over for a party.

Biz and Tyler enjoy living near Lake Michigan in their old 1920s hotel apartment, though Tyler wishes the building still had linen and meal service like the Hotel Sherwin used to have. After getting copies of the 1930 U.S. Census that Curious City uncovered for their building, Biz said, “I’m going to have a really good time reading this, finding out who all these people were. I think that’s so cool that we know who was here.”

Thanks to Daniel Bluestone of Boston University; Elizabeth Collins Cromley of Northeastern University; and Emily Ramsey of Ramsey Historic Consultants for their help with this story.

This piece was produced in partnership with WBEZ. The Chicago Architecture Center provided research, expertise and other assistance during its development.

Got a murphy bed, pocket door, or other apartment feature from a different era? Share a photo with the hashtag #apartmentmystery and it’ll be included in our growing collection.

Have a question about the city’s architecture? Submit your questions to WBEZ’s Curious City. Jen and the team may end up investigating it.

What people are sharing via

Get to Know Your House

The hows and whys of Chicago’s architecture