Some of Chicago’s tallest buildings aren’t located in Illinois, or even the United States. That’s because skyscrapers around the world can trace their roots—or rather their grillage—to Chicago.

by Jacob Huebner and Jessica Cilella

When Chicagoans think about tall buildings, they immediately think of Willis Tower. For nearly 25 years after its completion in 1974, the 110-story building held the title of tallest building in the world. But the quickly changing tall building environment and an ongoing race to build taller has knocked the former Sears Tower out of the top 10 tallest. That doesn’t mean, however, that Chicago has stopped leaving its mark in the world of tall buildings.

Despite the fact Chicago buildings no longer stack up to the magnitude of buildings being constructed now, the city still has its impact. The tallest building in the world, Burj Khalifa, was designed by architect Adrian Smith while he was at Skidmore, Owings & Merrill LLP (SOM). Burj Khalifa will get knocked down a notch when Smith’s Chicago-based firm, Adrian Smith + Gordon Gill Architecture, completes Jeddah Tower in Saudi Arabia. The megatall skyscraper is currently under construction and estimated to be complete in 2020.

Other architects, structural engineers, developers and contractors based in Chicago have played important roles in the design and construction of some of the world’s other tallest buildings too. Here’s a look at some of them: 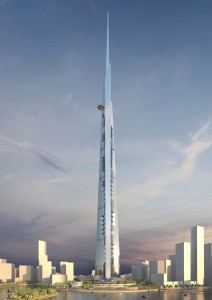 Jeddah Tower — This building is expected to be more slender, and at least 550 feet taller, than Burj Khalifa when complete in 2020. It will be a mixed-use building with a luxury hotel, office space, apartments and condominiums and the world’s highest observatory. 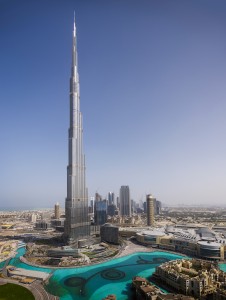 Burj Khalifa — Currently the tallest building in the world, the Burj Khalifa was designed by SOM’s Chicago office, which won the job through an invite-only design competition. SOM is also responsible for some of the tallest skyscrapers located in Chicago, including Willis Tower, Trump Tower and 875 N. Michigan Ave (John Hancock Center). 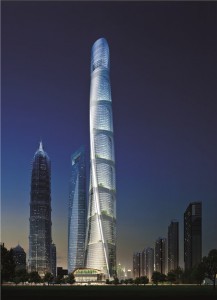 Shanghai Tower — The Chicago office of Gensler was significantly involved in the design of this spiraled building, which pushed Willis Tower off the world’s 10 tallest buildings list when completed in 2015. 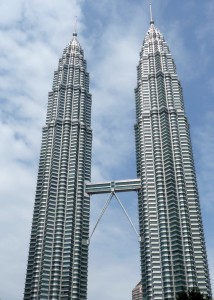 Petronas Twin Towers 1 & 2 — Bob Descenza, a retired project manager from Thornton Tomasetti’s Chicago office, led the structural engineering on this project, which was one of the first uses of Chicago high strength concrete technology on a super tall building. A sky bridge at floors 41 and 42 connects the towers and helps minimize their sway. 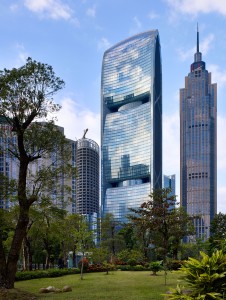 Pearl River Tower — Although Pearl River ranks lower on the list of tallest buildings, its design—by SOM’s Chicago office—is worth noting. The building’s curves direct wind into openings on the mechanical floors, activating turbines that generate energy for the building. SOM also incorporated other green technologies into the 71-story building, including solar panels, a chilled ceiling system, under floor ventilation and daylight harvesting.

Evolution of the Skyscraper