Chicago’s Planned Manufacturing Districts, or PMDs, are aimed at protecting some of the city’s historically-formed centers of industry. But where are the PMDs, what's their history and where are they headed? Here’s a CAC primer on Chicago PMDs.

A Planned Manufacturing District, or PMD, is an area of land where the zoning laws prohibit residential development and other specific uses. Many cities have them, if not by quite the same name. PMDs were designed to “foster the city’s industrial base” and “maintain the city’s diversified economy,” as city planners originally put it. The Clybourn Corridor PMD, Chicago’s first, was created in 1988. Since then, 14 more PMDs have been created in Chicago, and ten of them are on the city’s north and northwest sides. 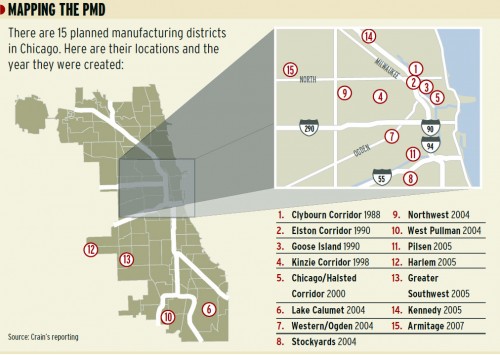 2. PMDs and a Piano Factory

In Chicago, ward aldermen hold the keys to zoning in their respective wards. The result is a patchwork zoning approach that was, at the time, unaffected by any city-level land use policy that might’ve recognized the value of industry and jobs, or the threat to those from intruding non-industrial uses. The upshot for the North River Industrial Corridor, for example, was dramatic: in the ‘80s, 50% of industrial firms—some 600 of them—were lost. Industrial employment fell from 40,000 to 20,000.

In 1985, after a former Baldwin piano factory at 1872 N. Clybourn was converted into loft space, advocates for industry finally proposed “Planned Manufacturing Districts.” Recognizing the value and history of manufacturing in Chicago, PMDs were intended as a bulwark against residential and commercial pressures, providing stable and assured urban havens for industry.

3. Finkl Steel was Within a PMD

For well over 100 years, the A. Finkl & Sons complex of steelmaking buildings sat in its quarter-mile stretch of Lincoln Park land along Cortland Avenue. Finkl was Chicago’s oldest steelmaker when it made its 2014 departure to new digs on the city’s far Southeast side, and the 28-acre site that Finkl left behind lies entirely within the aforementioned Clybourn Corridor PMD.

In the early part of 2015, the Finkl plant and its buildings had made their way onto Preservation Chicago’s list of the city’s seven most threatened historic buildings. Some believed the Finkl buildings were dull and unworthy of preservation; others saw them as important reminders of Chicago’s industrial past. As the year rolled on, demolition began. By September of 2015, iconic Finkl signage—featuring arched white cylinders and the stylized Finkl “F”—was being offered to those willing to take it. The future of the Finkl site remains an open question, as Alderman Brian Hopkins has not yet detailed his plans for redevelopment.

4. Chicago’s PMDs Are a Subject of Great Debate

Proponents of Planned Manufacturing Districts point to the success of PMDs like Goose Island, which, since becoming a PMD, has added some 75 firms and some 4,000 jobs. They hold that PMDs are a necessary source of clarity for industrial businesses, which benefit greatly from knowing their business concerns are safe from the encroachment of residential development. PMDs can also provide a stable land-use policy for the city, which can smooth the path toward new financing options, and to infrastructure advances including new bridges, streets and viaduct clearances—all of which assist in attracting businesses to PMDs.

Those critical of PMDs say that blue-collar jobs are bound for the suburbs and exurbs, no matter how cities try to zone for them. They cite broad changes within the economy and labor force. Today’s industry is less reliant on access to logistical hubs and waterways; firms now seek cheap land, with enough room for spacious, single-floor facilities. Urban areas, in short, have become less advantageous to industry. There’s also the shift toward a talent-based economy, which has seen commercial firms locating near the most dense concentrations of talent—namely, inner cities. PMD zoning has frustrated some Chicago officials: Alderman Hopkins said his PMD’s prohibition against new housing and retail space felt “almost like a set of handcuffs.”

In 2015, the idea of PMDs as an effective zoning tool weathered a series of blows. For example, exceptions within PMDs in such areas as Fulton Market have allowed for new hotel uses. There have been increasing calls for relaxing PMD restrictions from those who feel that industry simply isn’t returning to the city. But will relaxing PMD rules simply allow previously industrial zones to be parceled out to developers? And what fate will befall the sorts of bold proposals being made for PMDs in the West Loop and on Goose Island? CAC will continue to track the story of how Chicago zoning code affects the location and nature of the city’s coming economic engines.

Through adaptive reuse, we celebrate Chicago’s deeply-rooted history — maintaining the historic integrity of old structures while creating new opportunities and amenities for the public.

Design Dialogues: Zoned in on Industry