Judith Kaufman, CAC Docent Class of 2010, was bitten by the architecture bug while working on a capital campaign as the Director of Planned Giving at Illinois Institute of Technology.

Inspired by the Rem Koolhaas-designed student center, Judith decided that she would become a Chicago Architecture Center docent when she retired. True to her word, she retired on June 1, 2009, and interviewed to join the renowned CAC Docent Training program on the same day. 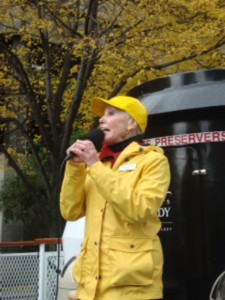 Judith loves being a CAC Docent because it gives her the opportunity to be a storyteller and to learn about other cultures from her tour-takers. “CAC gives back to me as much as I give to it,” says Judith. In the summer, Judith usually does four boat tours per week. She says the river is the best place in Chicago to be in the summer, “I love getting to float home.”

Having worked as a professional fundraiser for much of her career, Judith believes that when someone chooses to become involved with a non-profit, it is important to analyze what the organization needs from you. Judith supports cancer-related charities with donations, because she is not a researcher, but knows that her money can help support the work of those individuals who are researchers.

Right now, CAC needs her passion and time as a docent. She chose to become a member of the CAC Blueprint Society because she feels it's important to support CAC’s endowment, ensuring there are resources for CAC’s future.

“If an organization doesn’t build its endowment, it’s never going to get off the treadmill, making it difficult to take on longer-term projects.”

Judith says that CAC is the organization that represents this incredible city to the world. We're grateful that Judith supports CAC today by helping to tell the stories of Chicago and its architecture. And she has included CAC in her will as a member of the CAC Blueprint Society, so she is supporting CAC tomorrow, too.