As we know, time heals all wounds. Today, those developments abandoned during the recession are getting back on their feet—or are already standing tall.

In May of 2015, CAC's evening panel series Design Dialogues brought together three individuals working in the heat of recession and post-recession development: 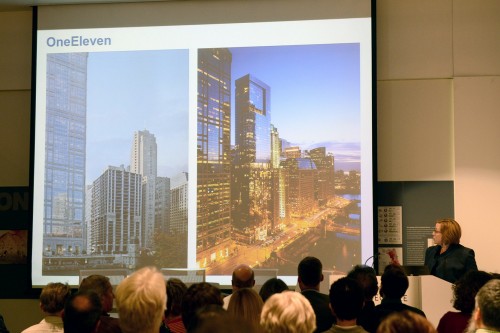 Thompson discussed her work with OneEleven West Wacker—originally a planned hotel/condo development. After construction stopped in 2008, the downright depressing concrete mass lingered until Related Midwest purchased the site in 2011. With Handel Architects, the team completely reworked the site to become the luxury rental space that it is today.

She also noted Related Midwest’s recent acquisition of the project formally known as the Chicago Spire; they are currently seeking solutions to fill the gaping hole on the lake. 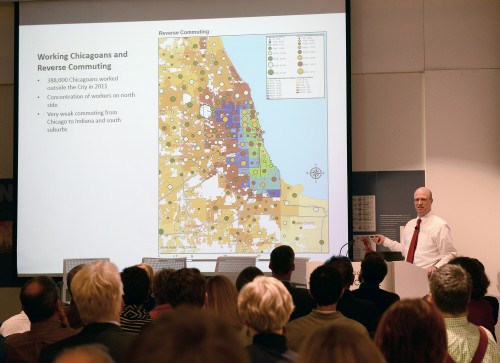 Benet Haller, Director of Urban Design and Planning at the City of Chicago

Rather than citing specific projects, Haller dove into the “big data” collected by the city of Chicago. The data articulates the relationships between employment accessibility and where workers choose to live. His findings demonstrate that since the recession, job opportunities in the Loop and northwest suburbs have increased, and people working those jobs have moved to the north and northwest sides of Chicago. However, with fewer businesses relocating to places like Indiana and the southwest suburbs, the South Side of Chicago continues to go undeveloped.

Also, one should know: Haller is a ham. Invite him to dinner sometime.

How the Tech community is Influencing Design

Blame Mark Zuckerburg for the comeback of the hoodie—and the rise of new architecture. Cahill articulated the supply-demand relationship between Chicago’s tech industry boom and architecture. He noted that Chicago’s tech businesses have proven to be financially lucrative hiring machines that demand diverse talent and beautiful spaces.

1K Fulton (the former Cold Storage Facility), which will hold Chicago’s Google headquarters, has been at the center of this tech-driven architecture movement.

The key point from the panel applies to all fields: In times of crisis, it is important to be innovative and creative and to approach design with visions based on viable concepts. Dream big, but lean forward when you listen to your clients—or potential clients.

Thompson contextualized this in the scope of OneEleven West Wacker. Prior to Related Midwest’s acquisition, the tower was meant to be a luxury condo building. The company rethought the premise of the building and realized that the original vision for the site was too aggressive and generic; rather, developers should shift their scope. Potential residents desired to live closer to their workplace (as Haller’s data confirms), and were wary of tethering themselves to a mortgage. As a result, OneEleven West Wacker has become one of the most successful rental complexes in Chicago. Luxury concierge service meets hip, small and urban living.

The propagators of tomorrow’s real estate capital (should we drop the term “millennials,” yet?) are living in unprecedented ways, and the recession simply brought this to light. They want smaller spaces, access to city experiences, greater recreation areas and—if they choose to have families—good schools. The recession also brought to light the underserved communities on the South and West sides of the city, where low access to employment disincentivizes development.

With a combination of innovation and big data, Chicago has produced a coordinated response to the recession without neglecting those who have the greatest needs or the newest desires. Though we have treaded the waters of recession, it doesn’t mean 2008 was the last time we’ll see a financial crisis of that magnitude. But what we’ve learned through the experience will prepare Chicago for what may come. And if it truly becomes hell or high water, at least we have a 76-foot hole on our lakefront that we could turn into a swimming pool.

Straight From the Panel

Missed the discussion? We've got the panelists' slides here.