The postwar and Mid-Century period lasted roughly three decades, from around 1945 to 1975, with numerous Chicago-based architects and firms affirming the city’s status as a global design center. While the era of Bertrand Goldberg, Natalie Griffin de Blois, Ludwig Mies van der Rohe and others has since passed, its echoes are felt today as contemporary architects reference, remix and revive the tenets of Modernism. 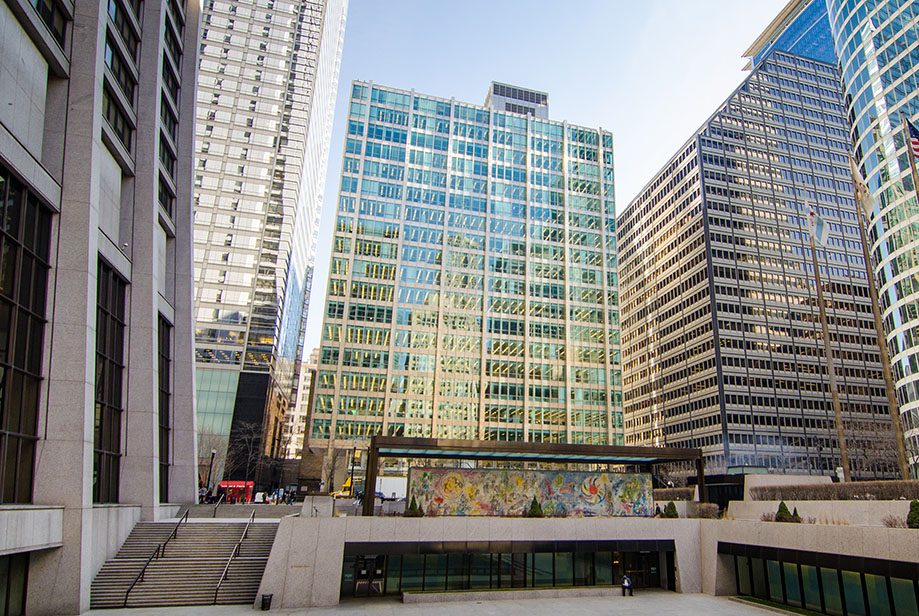 I would never have guessed this polished landmark at West Monroe and South Dearborn Streets dates back to 1957—it still looks so sleek and new. Designed by Bruce Graham and Walter Netsch of Skidmore, Owings & Merrill, its aquamarine glass and stainless-steel frame really set it apart from fellow Modernist buildings clad in black and bronze. The Inland Steel Building certainly proves that “less is more” doesn’t have to be a bore! —Michele Kuhn, Coordinator of Volunteer Services 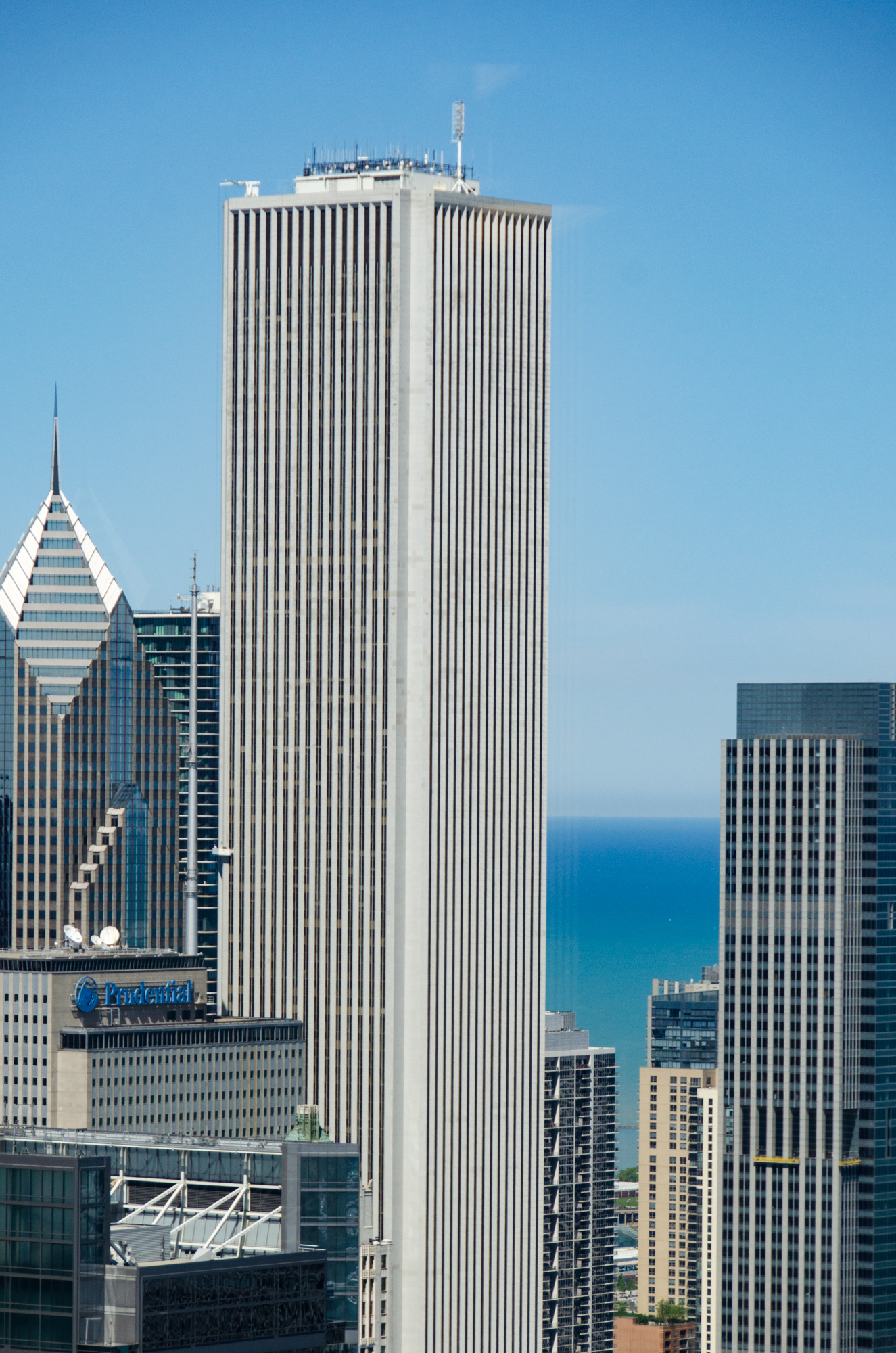 Chicago’s third-tallest skyscraper—soon to be fourth upon the official opening of Vista Tower—Aon Center is truly a work of art on Millennium Park. Edward Durell Stone, among America’s most famous architects in the 1950s and notably not influenced by Mies van der Rohe, originally designed the tower with Perkins and Will as a global headquarters for the Standard Oil company. Like many an artist’s sculpture, it was first clad in Carrara marble, replaced entirely with granite as the original panels were compromised by Chicago’s freeze-and-thaw extremes. Now 47 years old, the Aon Center still stands proudly and prominently in Chicago’s skyline. —Hallie Rosen, Director of Program Operations 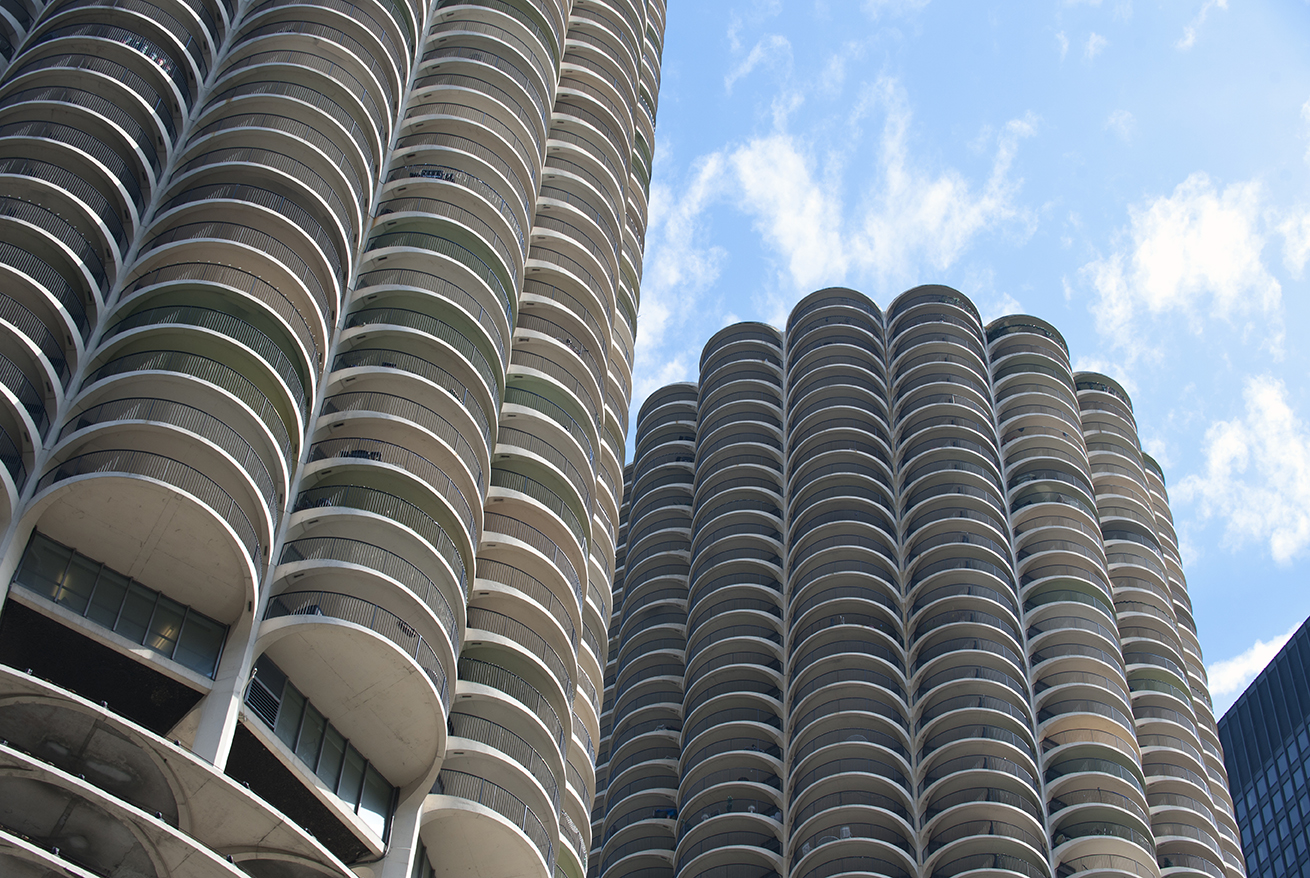 Completed in 1967, architect Bertrand Goldberg’s twin towers, aptly and affectionately nicknamed Chicago’s “corncobs,” were profoundly different from anything built previously in the city. The cylindrical design of Marina City was not only unique in itself; its “city within a city” concept, which included a new theater and office building, proved effective and influential in reversing the trend of suburban migration. Because of its riverfront site, squeezed between the Dearborn and State Street bridges, each component of Marina City had to be expertly and innovatively designed—even its parking garage. —Caroline Duda, Manager of Volunteer Services 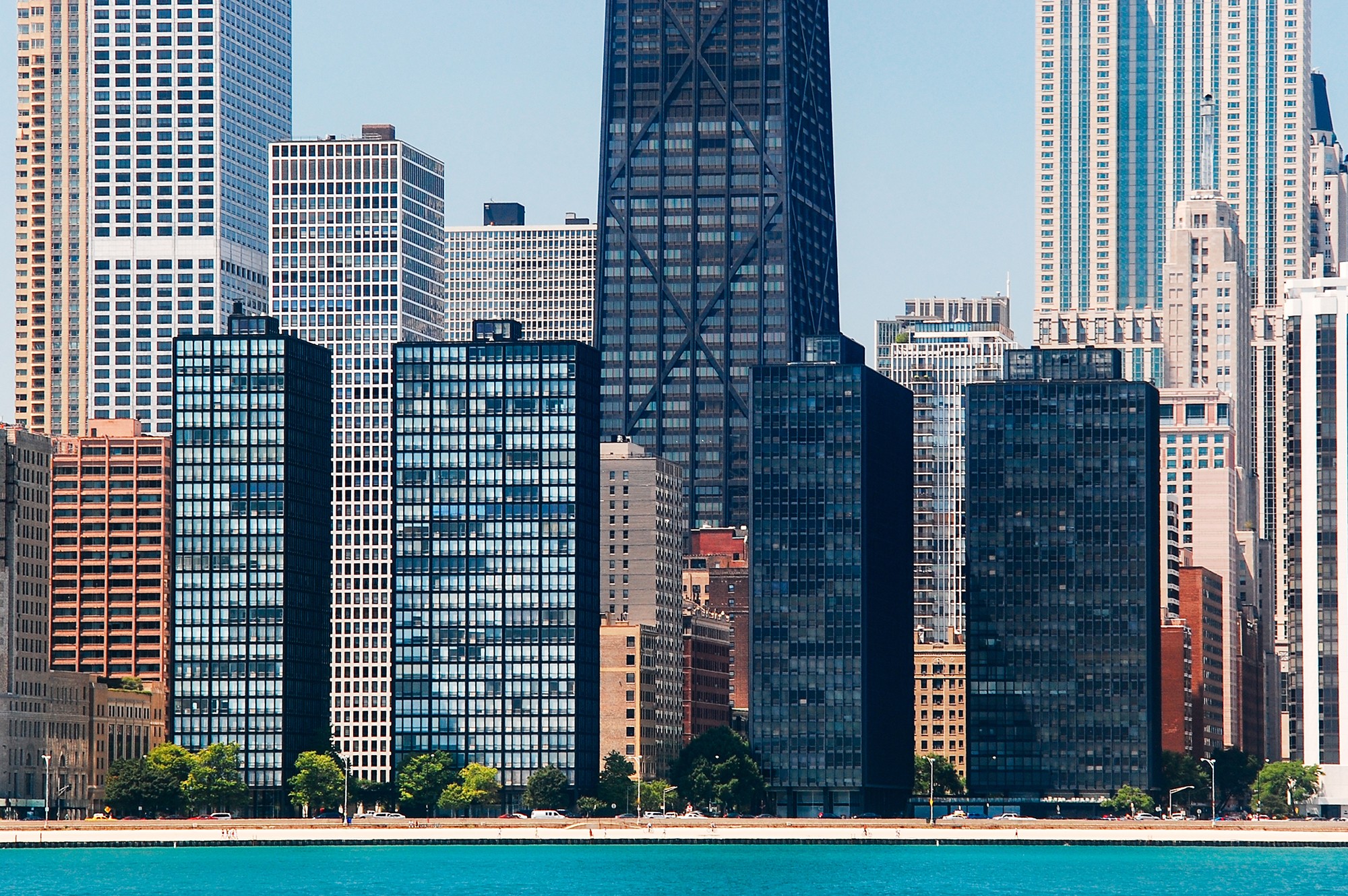 If Mid-Century and mid-’90s architecture are ever mentioned in the same breath, it’s probably only to reinforce just how aesthetically divergent the two eras were. That’s one of the many reasons why their juxtaposition in A Stainless Steel Apartment, completed in 1994, is so surprisingly successful. By merging two vertically stacked units in an upper corner of Ludwig Mies van der Rohe’s 860 North Lake Shore Drive—one of two neighboring residential towers completed in 1951—architects Krueck + Sexton exposed its glass curtain wall from the inside to face a floating staircase that seems to descend directly into Lake Michigan. Mies believed in letting the nature of materials speak for themselves and A Stainless Steel Apartment upholds that credo nicely, adding the observation that available materials themselves change over time and cycle in and out of fashion. —Zachary Whittenburg, Director of Communications 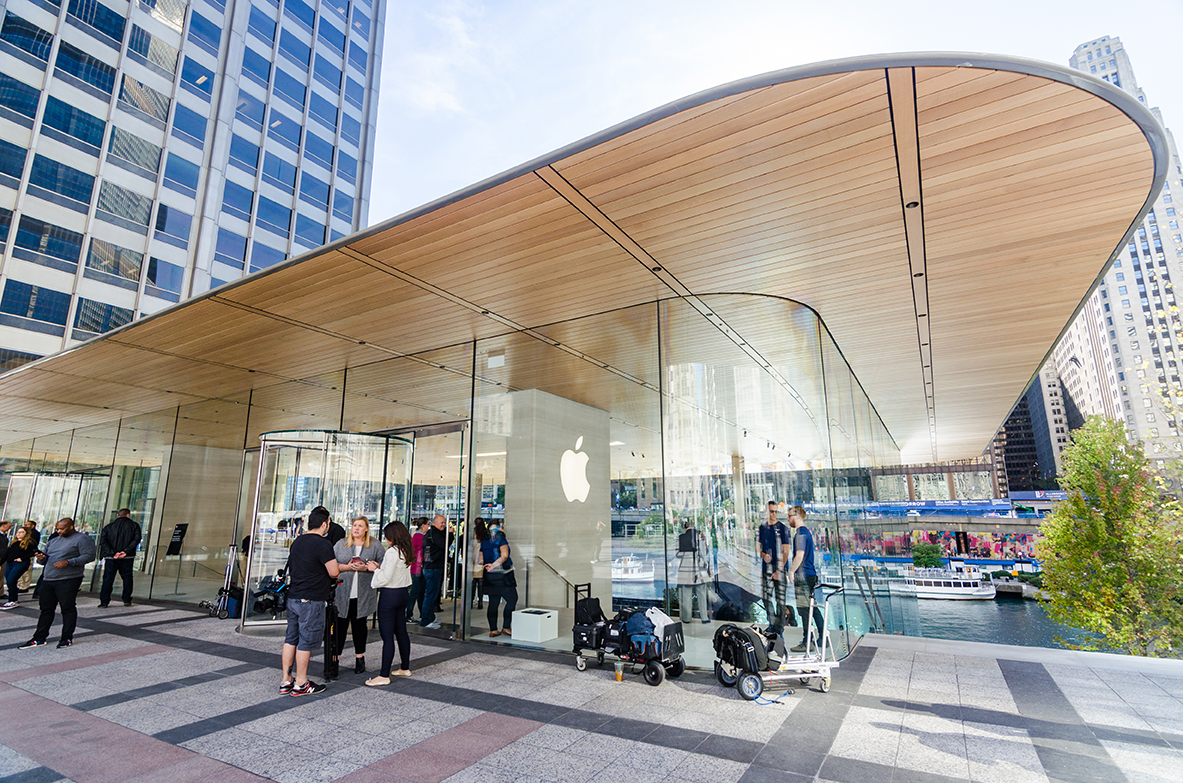 I have long been a fan of London-based architects Foster + Partners, whose iconic structures include the Reichstag New German Parliament in Berlin, the elegant Great Court of the British Museum, and 30 St Mary Axe, popularly known as “the Gherkin.” So I was thrilled to hear they would design a new flagship store for Apple in Chicago—right across the river from the Chicago Architecture Center. It’s fitting that Apple applies its strong design aesthetic to the built environment as well; Foster + Partners have also designed numerous Apple Stores worldwide as well as the new Apple Park in Cupertino, California.

The store’s designers aimed to create a “town hall” at the same time Mayor Emanuel sought ways to activate the Riverwalk. I think they both got what they were looking for. The keys to this building are its simplicity and transparency—it nearly erases the boundary between inside and out and makes an important connection between Pioneer Court and the Chicago River. The way it’s wrapped in structural glass gives the impression that its roof of carbon fiber “floats,” with a bit of help from four columns inside. It’s a beautiful example of corporate modernism updated for the 21st century. —Lynn Osmond, President and CEO