In addition to loving Chicago, its architecture and history, some CAC docents, education guides and exhibit hosts have found love with each other. In celebration of Valentine’s Day—and 50 years of the docent program—here are a few of those stories. 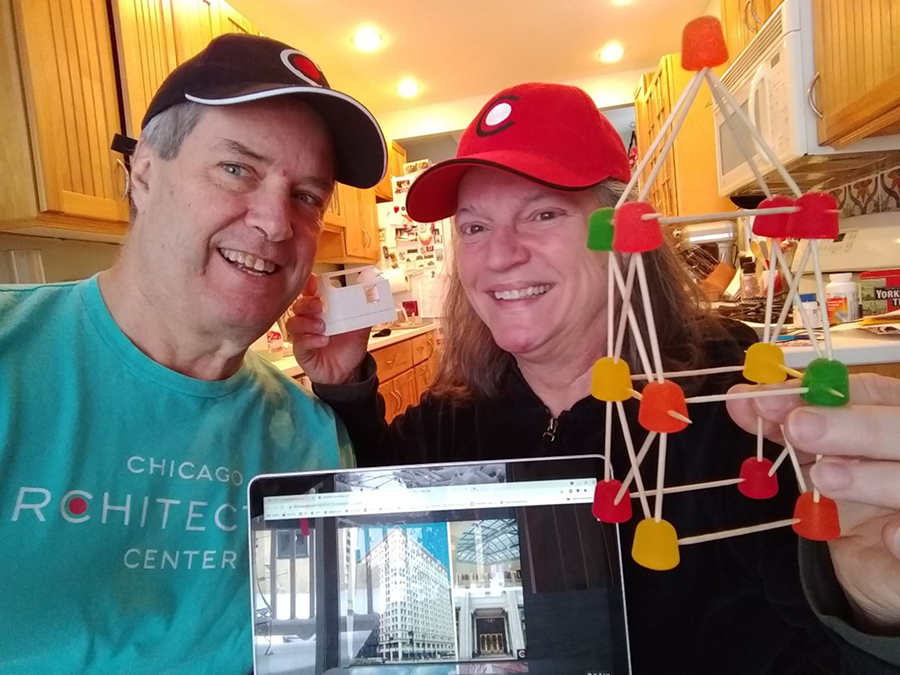 In 2015, after 20 years in the Washington, D.C. area, Carol Muskin and Chuck Pierret moved back to Chicago to be closer to family. Both attended graduate school at Northwestern University, lived in Chicago in the ’80s and early ’90s and, as so many do, they fell in love with the city. “I was mostly retired from a career in education and looking around for fun and meaningful volunteer activities,” says Muskin, who became a CAC education guide in 2016. “I was drawn to the CAC’s program because it allowed me to interact with children and teach them about our great city.”

When Pierret retired in 2018, he saw how much fun Muskin was having and decided to join her as an education guide the following year. “The program is perfect for couples like us,” says Pierret. “Visiting school groups often need several guides, so we sign up for the same tour and commute together. In the fall of 2019, we led tours for the Chicago Architecture Biennial at least once a week. Now, with schools closed, it’s been a slow time for guides, though we did lead an in-person family tour, a virtual tour, and helped with virtual summer camps in 2020. We can’t wait to see kids back at the CAC.” 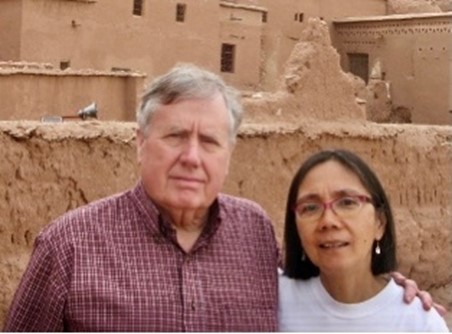 Maria Corpuz and John Hug—CAC docents since 1996 and 1999, respectively—knew each other prior to becoming a couple. Their relationship grew in 2003, when Hug moved to Hyde Park, “where I’d lived long before as a grad student at the University of Chicago,” he says. “And Maria had lived in Hyde Park since emigrating from the Philippines at age 13.”

One of Hug’s first activities after his move was to return a phone call from Corpuz, who’d asked if Hug could substitute leading one of her CAC tour dates. At the time, the two didn’t realize they lived next door to each other.

“Things progressed toward our marriage in 2006,” says Hug, describing it as a neighborhood-focused affair. “Our ceremony was in the University of Chicago’s Bond Chapel, with receptions at the Quadrangle Club and Smart Museum of Art. We’re among few people to have walked home in wedding attire after our reception.”

Hug notes the impact of the pandemic on their daily routines. “We’ve reduced or eliminated our culture-junkie lives and had to forgo most of our CAC tours, plus the tours we used to lead for the Frank Lloyd Wright Home and Studio and Glessner House. As we’re also travel fanatics, we lost seven planned trips in 2020. But we did get to visit four new national parks, bringing our total to 43, and made our own Midwest architecture driving tour of Iowa, Minnesota and Wisconsin.” 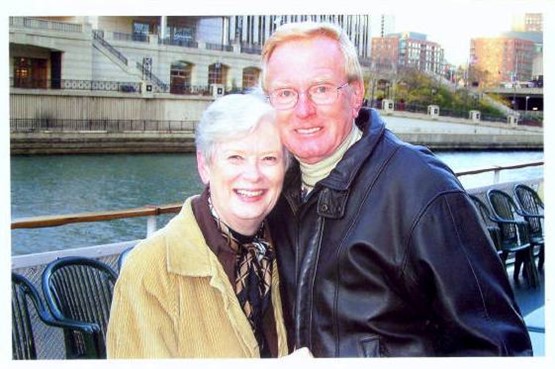 “We met over 60 years ago while students at Chicago Teachers College, now Chicago State University,” says Donald Wiberg of Joyce Wiberg, both CAC docents since 1996. “Joyce was a cute, freckled redhead and I was redheaded, too—what a match! From our first date to all our years as docents for the CAC, we’ve always enjoyed doing things together,” Donald says.

“When we attained docent emeritus status together in 2016, we were very honored,” he continues. “After almost 20 years of volunteer service, it was time to move on.” They handily earned the distinction over their many years as docents, having served as tour directors (Bike the Lakefront), trivia champions, and authors of “Tour Tips” in the since-sunset Docent News.

Their favorite tour? The Chicago Architecture Foundation Center River Cruise aboard Chicago’s First Lady, of course. Another shared passion? Magic. “Joyce and I performed magic at corporate events,” says Donald, “and we made six appearances on WGN-TV’s The Bozo Show.”

“Although we’re no longer involved in the CAC or magic, we look back on those years as some of the most interesting and gratifying of our lives,” says Joyce. “We’re enjoying life and look forward to celebrating our 62nd wedding anniversary next July.” 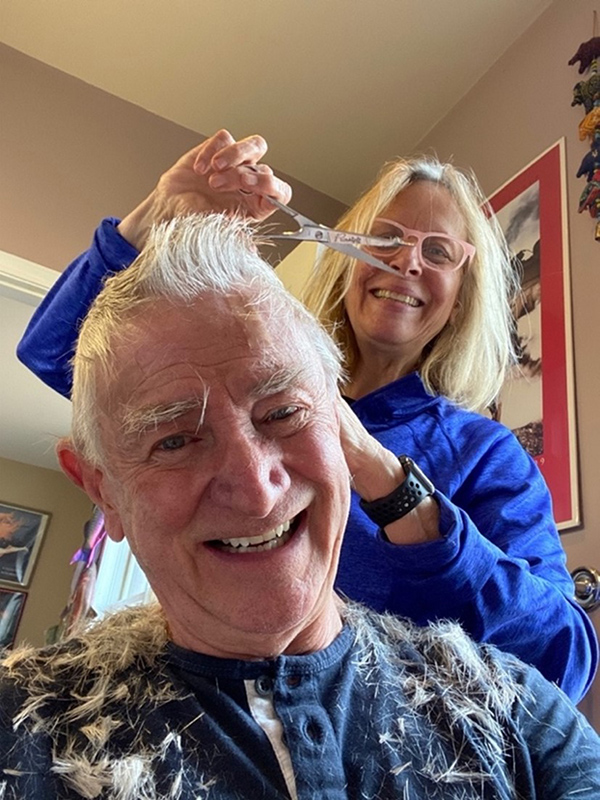 “I first noticed her standing on the terrace of [Frank Lloyd Wright’s] Fallingwater house,” says Brent Hoffmann of Susan Robertson, CAC docents since 2005 and 2009, respectively. “We were on a docent enrichment tour to Pittsburgh in August 2012. She was attractive, tall, dressed in black and looked vaguely European.” (Robertson had worked in Geneva, Switzerland before retiring to Chicago in 2007.) Hoffmann invited Robertson out for a coffee.

“I thought he’d called me to do an interview for one of his docent profiles in the newsletter,” says Robertson. “But it was actually our first date.” In mid-March 2020, they got engaged in a brief ceremony, surrounded by tourists at the Parthenon in Athens, Greece. Although they’ve foregone travel during the pandemic, the pair has kept busy with Zoom meetings, CAC Live and other online programs, and biking in place on their Peloton. Robertson also participates in a CAC book club while Hoffmann writes profiles for The Bridge, the CAC’s digital bulletin board for volunteers. As for architecture tours, they look forward to leading them again soon. 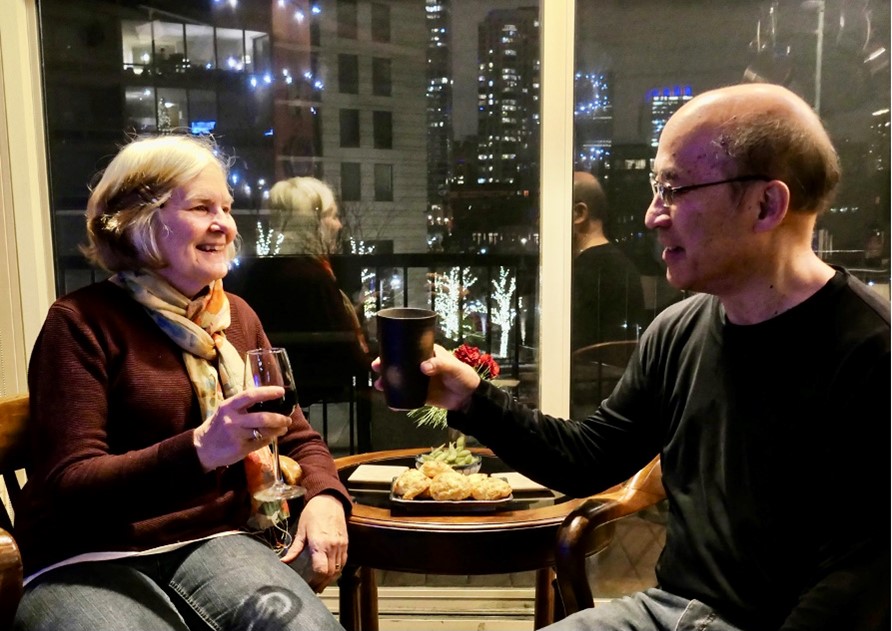 “We’re together 24/7 and we still like each other,” says Lynne Hensel, CAC docent class of 2010. “We met many, many years ago when I was a mere child of 23 and Larry was a much older man: 29.” She and Lawrence Kameya both taught at the same Detroit-area college for a year after which Kameya, CAC docent class of 2013, left for Cleveland. After life and job changes—and 25 years—Kameya returned to Detroit.

“I called Lynne, invited her to lunch, and the rest is history,” he says. Hensel’s retirement and another job opportunity for Kameya brought them to Chicago in 2008. In 2010, Hensel joined the CAC’s docent corps and, after his own retirement, Kameya followed three years later. “Retirement has proved to be good preparation for pandemic sequestration,” Hensel observes. “We’d already laid claims to different parts of our condo, so we can work without irritating each other too much, but the pandemic dramatically increases our togetherness.”

“We converted our dining area to a yoga and exercise studio for streaming classes,” adds Kameya. “And I now spend more time than before in our storage unit across the hall.”

Preparations for the CAC’s first-ever virtual Docent Appreciation Night occupied much of the couple’s time at the start of the pandemic. They’ve stayed busy since with Zoom meetings, church activities and leading CAC tours of Fulton Market and, during cruise season, on the Chicago River. “Throughout it all, one ritual has remained a constant,” says Hensel. “Our nightly happy hour.”

Subscribe to the free digital mini magazine CAC@Home to catch future installments of “Looking Up,” the CAC’s yearlong celebration of its docent program’s 50th anniversary.